It's Giveaway time! We're in Barcelona so I picked up a scarf-pareo from Gamaya, one of the boutiques in the Old Town.

I loved the scarf so much that -  as you can see -  I bought one for myself. And wore it three days straight. 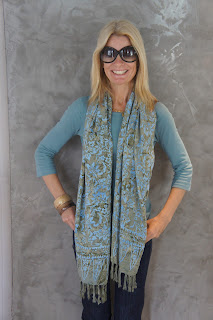 To be in to win the Barcelona scarf simply 1. Be a Follower and 2. Leave a comment.

I've always had a tricky "relationship" with scarves. The perky small ones make me look like a demented stewardess. The longer ones are usually too stiff, like I've swiped freshly-starched altar linens. This one is soft, lies flat, keeps you warm in the spring night chill and is flutteringly flattering over the puku (tummy) after too many pans of paella and "otre vino blanco" at Irati Taverna.


I know it seems like I'm forever swanning around the globe, but this is our first week away from the kids in nearly 14 years. (The previous four times have been two nights.) I'm keeping hubster company on a work trip. As you might remember the last time I did this, three-month old Harley pooped all over the white carpet in a Swiss Palace, so all good memories there.


You might be expecting to read all about the 15th century churches and just to show you I'm a good all-rounder I'll slip in a few bits of culture amidst the jamon humour.

The first day saw me doing a inspired audition for the part of the ugly tourist. We made the mistake of asking the concierge at Hotel Arts for a cheap and cheerful restaurant with a great paella. In my experience most young concierges send you to the theme park places. A $6 cab ride found us at pricey waterfront icon called Barceloneta with a paella heavy on the salt (and don't get me wrong I love salt) and spare on the seafood.

After dinner we ordered a taxi after being assured us it would take five mins. Half an hour later, fed up, we walked downstairs where there were five taxis waiting. "Just one moment, you wait one moment" the front desk beauty huffed. We walked up to the first taxi who welcomed us. The journey ended three minutes later with a fare of US$30. The driver had charged us for waiting 20 minutes.

Feeling sorry for us, our hotel offered us dinner for two on the house. Undeterred by this graciousness, next day I turned up for a call-back audition for ugly tourist. I couldn't seem to communicate an order for a double non-fat latte in a tall cup.

After ten minutes I had attracted a crowd of staff around me translating my order into Spanish, each of them chiming in a new word. Eventually we had a ten-word description. My order was filled with much nodding and chatter and good-natured waving from the staff.  Feeling pretty embarrassed by my inflexibility - couldn't I just have had a simple cafe con leche? - I headed to the old town with my friend Laura, who is also here.

Laura had the joy of sight-seeing with a blogger -  someone who takes hundreds of photos in one day (one day I took 250!) someone who scuttles after people in the street who might make a good pic, someone who chats wildly to everyone and anyone. Or is that just me? We decided Laura should form a support group with my kids and family, sort of "blogger bystanders in line of fire".

Anyway she was a good sport and and even called "Work it! work it!" when I asked her to take photos (top) of me prancing around the beachfront flapping my scarf . The horrified young lads playing soccer nearby moved away moy pronto.

We drifted through the old town among the wonderful 15th century churches. And down the street we came across "Happy Pills"  candy for every part of your day... 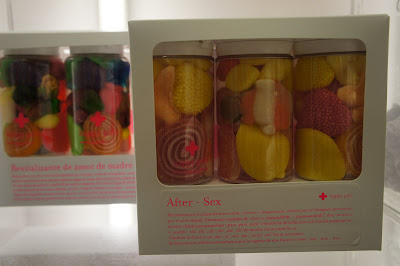 And one store selling only knives, scissors and nail clippers. Is that where my scissors go?
That night we quested again for good paella. We took a taxi for a little-known place Laura had heard of called Can Ganassa  After taking a circular Tiki Tour of the area, we landed close to start point at a place with Donald Duck and Fred Flinstone out the front and a mammoth screen TV inside.

Our hearts sank, how authentic could this be? Turns out very. Though we ate with Fred and the blokes, our view was this. We made our way through much of the tapas menu including sardines, asparagus and hot peppers, with a total bill of around US$20 each.

Our waiter, Adrian had spent years alternating between travelling and working at this restaurant. Ten years ago he hiked around New Zealand and acquired this tattoo Whitu, Maori for seven. Why seven? Why seven? We were expecting an epiphanous story which had changed his life and now ours. "I couldn't think of anything else" Adrian shrugged. Taking pity on our disappointed faces: "Oh well ..." he said dredging his memory "When I played waterpolo I was number seven."
We laughed so hard we forgot to order paella.

Now remember to leave a comment to be in to win!

Posted by About Last Weekend at 7:01 AM

Email ThisBlogThis!Share to TwitterShare to FacebookShare to Pinterest
Labels: Fashion For Grown-Ups