How To Have a Mad Men Party - The Mod Years

On Saturday we had (yet another) Mad Men Party, (yet another) fundraiser for the kids' school. This time is was The Mod Years - 1968. It was the most enjoyable party we've hosted in a long time. We couldn't quite pin down why; must have been a combo of the 40 guests and how easy and organised were our six co-hosts.


Prep: One of the most dangerous things you'll do in your life is bring back balloons from Safeway. I have bungy jumped in Queenstown and backpacked through Syria by myself and neither was as life-threatening as driving party balloons around town. Every time I blopple-bob 12 balloons into my car I think: this could be it, someone comes at me from the side and I can't see them because of all the pink, blue and yellow. The good news is that at my funeral everyone will say: "She went out with a bang! It was how she would have wanted it..."

Food and Booze: From the other Mad Men party (and my birthday was 1962-themed) we learned - Keep it simple...no, even simpler than that. I knew I had some good co-hosts when I was considering the chicken and someone said: KFC! Rule of catering... even if your guests are the ultimate gastrosnobbes, fried chicken always gets eaten first.

Starters was chex mix, cheese straws and meatballs. Dinner was macaroni cheese from homeroom, a restaurant in Oakland that only serves mac'n'cheese and has lines around the block at every minute of the day. Fried chicken from Safeway (I bought 150pieces and we were left with 75 - people don't eat as much as you'd think at parties) chunks of iceberg lettuce with bacon and tomatoes and salad dressing over the top. Dessert was homemade brownies, flower cookies and cake. 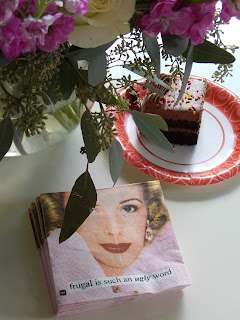 We've learned from our two others two Mad Men parties that many of the Sixties drinks are disgusting. We narrowed it down to Gimlets The Roger, Manhattans The Don and  Cosmos The Joannie, plus wine and kegs. Fresh is important for drinks, so there was a lot of lime squeezing before guests arrived.


Portrait: We took Poloroids of all the guests so they can take a photo home.


Games: We had hula hoop competitions and a quiz about the show. Other sixties games to try: Twister and Pass The Lemon (if people know each other well)


Posted by About Last Weekend at 4:34 PM