The Big Purge (and whether you're an Inny or an Outy)

We're home now--to rain. Thank goodness the drought has broken. And now we're in the year they're calling Sweet Sixteen, my thoughts are turning naturally to the Big Purge (that sentence seems all wrong somehow).  For an article on how to best start, I interviewed two of my go-tos. Organizing stylist, Angela Hoxsey, owner of House in Order says to start with the stuff on the floor and go clockwise.  No, no, don't go to the drawers just yet (full article here)


You might remember that I've interviewed Angela before and I told her that my husband and I were opposites. I like all the surfaces clear, am a veritable Monica about that. To the extent that I actually give away all my books (I read about three a week) and when I do online video classes often I can't concentrate on what they are saying because I'm too focused on the shelves behind them!

But my drawers are a mess.

"Oh yes!" Angela said. "You're an Inny." I'm tidy and seemingly organized on the outer, but a secret mess on the inner.

My husband is an Outy who doesn't mind a bit of stuff on the benches but has tidy drawers (oh er missus).


Compare and contrast: The Hubstar's drawers: 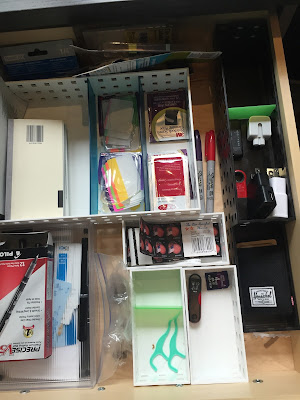 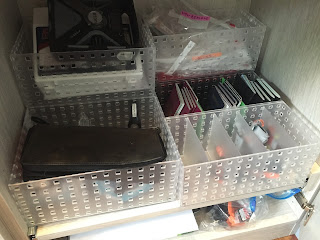 The second person I interviewed was Chad Olcott who owns Mulberry's Home in Oakland--love how calls himself a "decorator" so old school --said his best clear-out came last year when his house was photographed for the SF Chron. He took out the little stuff--pictures on the walls, everything on the surfaces. Each of the littlies had to earn their way back in. So his advice is: imagine a newspaper or magazine is coming to your house.

The constant thing we have to purge is--you would not believe it--costumes! What's yours? Because we have so many themed fundraisers at the three schools the kids have gone to, we have accumulated what turned out to be a carload of costumes. We did this purge in late August. 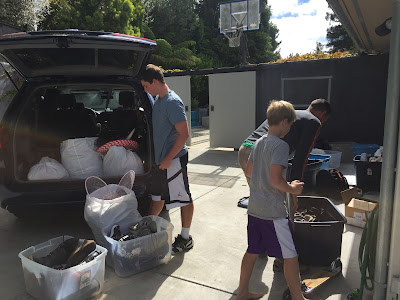 Good! All cleared out. But since then we have actioned three more costumes...


So it's back to commandeering the boy in the upstairs corner room to take them down to the garage to store.

What's your groundhog day of effluvia? (Wow, this blog post really took a strange and messy turn, just what you'd expect from an Inny, innit?)


Posted by About Last Weekend at 5:50 PM