And finally...we're home from being Home and Away.  I was so happy to be home in New Zealand and now I'm glad to be home in Oakland. A lot of people have said to me: how nice to have that time with your Tallulah, nine. Quite right. She was a brilliant little travel companion on our two-week road trip. 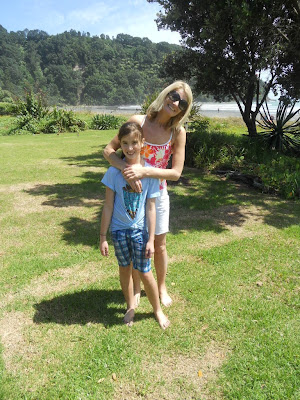 As our taxi pulled up to our house in Oakland I asked Tallulah: "Did you miss the boys?"(her three brothers age 13, 11 and six). I could see she desperately wanted to be able to say "yes" but she had to be honest. "Not. Really".

I knew what she meant. It was nice just us girls on our road trip, listening to continuous replays of the  Kings of Leon on every local radio in the North Island. Singing along - me trilling ever so slightly different words "shanty maces wear her feet" -  Tallulah pitch perfect with the exact lines "painted faces fill the places I can't reach".We had time to mooch around  knick-knack shops without any hurrumphing at the doorway.

But she had missed Kevin terribly. As soon as he heard our taxi, Kevin came sprinting down the driveway calling out: "Thank God you're back!" rescued from a two-week island of TV sports and bagels with the boys. And if the kids' reunion was not entirely moulded of Central Casting joyousness, it was touching. The elder boys gave Tallulah a careful hug - lots of spaced-apart patting on the backs and rehearsed "Hi Tallulah, did you have a nice time?"  The more effusive Cy went into for smooch, a squeeze and a swift kick on the leg.

Then it was business as usual. Cy had discovered a new saying that morning: "It's the technology!!" which he went back to yelling every two seconds, Harley asked to walk to his friend's house and Jackson refused to help clean up as he had homework to do. It was a freezing 30 degrees, the whole house was littered with ant traps as we'd had another infestation, Cy's homework was strewn the length of the kitchen and there was not a scarrack of food in the house.  "Dad never bought any groceries - we missed you Mom".

Over the past two weeks I had seen what makes a great kid road trip. Short spurts of outside activity; swimming, surfing and horse riding combined with generous portions of lolling inside;  telly and jewellery making. Tallulah had loads of time hanging with Grandma, allowing me to skadadle off to the petrol station to grab yet another steak and kidney pie. (Yes, I know they have a golf ball of fat in them. Don't care.) 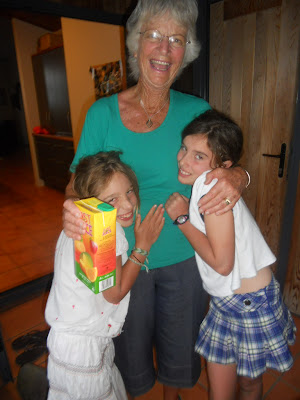 She and her cousin Leah, also nine, created all sorts of edifices including The Taj in Mum and Dad's garden. 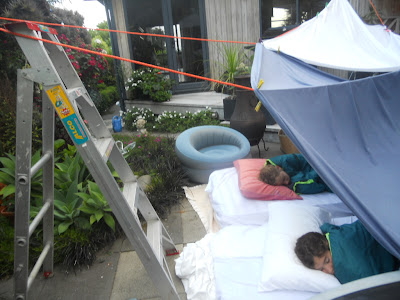 Like her elder two brothers, Tallulah is not a chatty possum, but it was nice to hear her oasis of musings. "I've noticed Kiwis like to be silly" she ventured after seeing these posters in New World supermarket in Whakatane. She adopted a "New Zild accint" saying everything with as few syllables as possible and trying on corkers like "Get off the grass!"(stop pulling my leg). 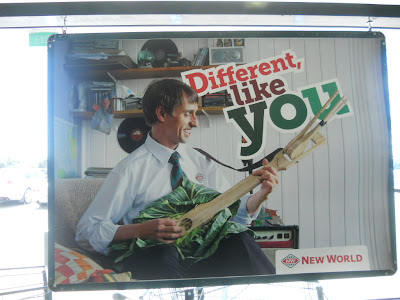 I realised the things that drive me wild about her - like her penchant for white food - I am guilty of too. At The Parade, a cafe in a converted tug boat in Wellington, I surveyed her fries and pancakes with a sigh, then realised everything I ordered was similarly beige. 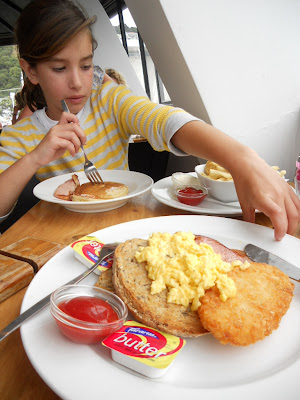 And realising she's not like me. In fact she's better than me at most things. At one get-together in Auckland my old friend Howie ( lawyer, bar owner and now tour operator to Buenos Aires) played Elton John on the piano while a crowd of us sang along. My singing was improving with every sip of Deutz and I then took to waving my arms and legs around, to some quite dramatic effect.  Later a friend remarked that Tallulah, who stood by the piano very shy and with arms crossed, had a beautiful voice. I agreed, but said what a shame about T's stagefright. Hmmm, said my friend: "Funnily enough, you don't get stagefright, but maybe you should". 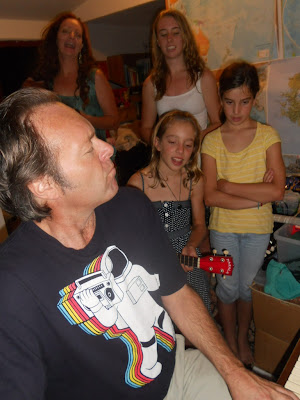 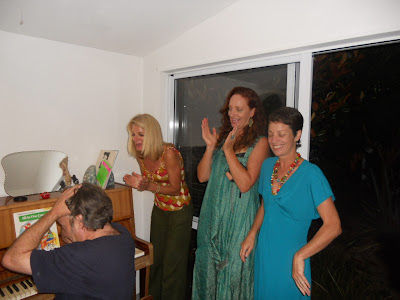 Tallulah didn't pack any "wobblies" and I didn't get brassed off with her - though I was annoyed one day when she didn't join some visitors for a swim. Tallulah said she was too shy: "It was like you were pouring strawberry yogurt on my feelings" she said.

It was nice to revert to my silly old Uni self, temporarily shedding the Mummynag "cmon, you guys, c'mon let's go", breaking up squabbles and always being the responsible one.  Refreshed, I now have all the best intentions be a better mother and not pour yogurt of any flavour over my Tallulah's feelings. And that goes for the boys too.

"It's the technology!!!" yells Cy for the tenth time in ten minutes. Hand me a bucket of yogurt.
Posted by About Last Weekend at 2:29 PM